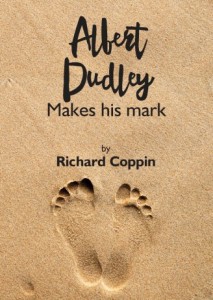 As a way to shame our two sons into keeping their rooms tidy, the idea of writing them a short story about two messy people must rank as one of the most bizarre, and as it turned out, the most ineffectual ways of instilling discipline. The story of two untidy brothers however could never get going, so I invented a completely lazy individual instead, cosseted by his aged parents, blessed with a bygone Christian name and granted a surname taken from the manufacturers of a plastic ruler; Albert Dudley was this way brought into the world.

When his parents died Albert Dudley inherits their estate and decides to head off to Ibiza for a lazy holiday. On the flight over he inadvertently thwarts Farouk el Makhir; a gun toting hijacker thereby becoming an international hero. More acts of supposed bravery follow when he rescues two small girls from the bombed-out wreckage of the hotel he’s staying at, wrongly assuming that the girl’s clothes he’s dragging out are in fact his own trousers stuffed with all his money.

The bomber of course turns out to be none other than the deadly el Makhir; a one-man splinter group, kicked out of a Middle Eastern faction. He’d been arrested when the plane had touched down in Ibiza, but had evaded the Spanish police and is now on the run. Albert’s life from this point is in complete peril, setting up a conveyor belt of humorous antics, near misses and cliff-hangers.

Enter then Penny Southerington who loves Albert’s apparent heroic status. Albert liking the attention lies about his life at home, embellishing a tale that he is a successful business man back in the UK. A love story develops but the gunman is never far away. Albert makes a number of friends as the story develops who help him in various ways to stay one step ahead of el Makhir. With Makhir’s eventual capture Albert and Penny’s romance blossoms in the Balearic sunshine. Back home in England, when Penny realises that Albert’s life is a sham she hits the roof, only there’s a twist that provides an ending that has all the hallmarks of farce at its best.

A further aspect that gives an elemental character to this book is in the development of its style. Albert by nature is initially a naive person and the beginning of the book is written in such a way that fits in with his childlike look at the world. In an almost imperceptible way the style of the book matures, so that by the end, when Albert’s experiences have forced him to grow up, the writing style has morphed into an adult narrative.
Definitely a story to enjoy and chuckle along to.

A section of Chapter Nineteen

In an instant the zing of a bullet blasted a hole in the wall, just inches from them. Their heads swung round with insect’s reflexes, only to see the shape of a demented workman charging towards them, screaming, and gripping a rifle as he tossed a black bin liner to the ground. He stopped momentarily to take aim once more. Albert and Penny didn’t hang about to see whether he was a good shot or not. They ran like the wind round the corner to the front of the hotel and made for the road. Another rifle shot rang out. People shrieked in terror and began to stampede to safety.
“Where to now?” yelled Penny.
“Just flippin’ run,” bawled Albert.
Yet again Albert was fleeing for his life down the same pavement he’d done just days before, and desperate for refuge when Penny snatched his arm and yanked him in a different direction towards the sand.
“Quick; the pedal boats. It’s a perfect hiding place.”
There was no time to argue. They flashed across the beach like racehorses. The sand was difficult
to run on. At long last, however, they arrived at the ramshackle stall. Penny thrust a wad of money in the astonished man’s hand and grabbed herself a boat. Albert helped push it into the water and as they leaped in and pedalled out into the bay, another shot ripped through the air, taking with it a piece of the owner’s shack.
“Get pedalling,” squeaked Albert, turning the water behind them into froth. Penny got stuck in too; four knees, like pistons, powered up and down, driving the tiny vessel out to sea. Not far away, on the beach, El Makhir had gained ground. He knelt on the sand and raised his rifle to his shoulder and cracked a shot. Inches away from the pedal boat a miniature torpedo rippled into the waves. The four knees went faster.
Their little machine cut a swath through the other craft which were frantically trying to get clear of trouble; there was pandemonium everywhere. As Albert and Penny approached the ‘padello water speed record’, another splash in the water; another missed shot. Albert hoped and prayed that they would all be misses. Penny looked across at Albert and shared a glance of petrified exhaustion. The swell was noticeably greater here, more like the real sea, quite unlike that close to the beach. And the water was darker, deeper. Albert looked back at the thin line of golden sand, and was horrified to see El Makhir pointing his rifle at the pedal boat owner as the poor chap heaved a sleek twin-hulled machine into the crashing wavelets. The next moment, he’d jumped aboard and was surging forwards like a madman […]