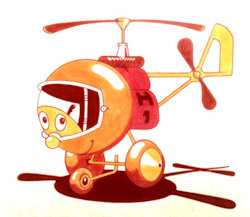 In 1981 I wrote and illustrated two books for young children using a character I’d invented called ‘Harry the Helicopter’. These are the black and white illustrations intended as samples; they would all have been coloured if the project had gone ahead. Harry was sent to some twenty five publishers that year only to have them all rejected. Among the few who were kind enough to give reasons for the rejection was Black Publishers in London. They informed me that there was no call for stories about helicopters. Six months later Lady Sarah Ferguson brought out ‘Budgie the Little Helicopter’. Dear old Harry, he doesn’t bear a grudge.
Here are the two stories for the young at heart out there. Please follow the links to join Harry on his adventures.