It’s a Different World (the biography of Les Spencer) 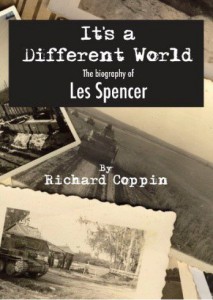 Les Spencer was ninety-two years old when a friend of his family contacted me to write his biography. On our first meeting I was met by a spritely and zestful nonagenarian; someone who nevertheless bore the scars of his life visibly etched into his features.

Born in 1919 to an unmarried mother he was put in care and treated to the most awful physical abuse. His sanguine attitude enabled him to downplay virtually all of his experiences; describing those days as simply ‘rough’. Getting a detailed explanation of his feelings was to prove a difficult job as he’d trained himself to lock his emotions away. It took care and time to tease out how he’d felt at certain times of his life, but eventually tears did flow.

The Army offered him his only real taste of family life. By force of character he joined the tank corps and saw action in North Africa, escaping after a battle near Tobruk from a burning tank with his head on fire. He was taken prisoner until the town was re-taken following the British victory at el Alemien. He was finally invalided home after another injury at the Falaise Gap in Northern France a few days after D-Day. Some of his wartime experiences are chilling; others have you laughing out loud.

In peacetime his life was a continual struggle. Finally married to the sweetheart he’d left behind before the war there were times of joy as well as tragedy. The book not only traces his life but glues it together with the world’s events during his life. The book’s main achievement however was to capture this incredible yet humble man’s personality, ensuring that future generations of the Spencer family will have a window on the life of a truly incredible ancestor.

During one tank battle near Bengasi, Les came face to face with the horror of what war was capable of. Now manning the gun in an American state-of-the-art tank, Les was in the thick of it. Round after round blasted out of his cannon, until he eventually hit a German Tiger tank. The high-explosive tracer covered the enemy machine in a fireball; bringing it to a temporary halt. The tank commander, realising that the cannon and the enemy tank we lined up perfectly, yelled that another shot be fired, this time with an AP round; an armour-piercing shell, straightaway. “My operator heard this and bunged one up in the breach with a seventy-five millimetre.” In training Les was taught to line up a target and wait to be tapped on the shoulder, an indication that the gun was loaded and that the operator was clear out of the way.

The level of excitement inside the tank was electrifying. Les to this day can’t say whether he felt that all-important tap or not, such was the pandemonium. “I fired,” he explained, “And the recoil [from the cannon] came back and took all his head off.” It’s a while before Les composes himself, and then he says, “That was all on me. Terrible. Terrible things happen. Just because he never tapped me, I don’t think.” There was no time for sentiment though. “My officer wasn’t worried,” he went on. “He said, ’Get him out, he’s gone anyway’. Well, we pulled him out and buried him at the back of the tank.” They couldn’t dig through the hard rock and sand, so they piled rocks over him. With the battle raging all around, clear thinking was what was needed. “We asked Ian Portland for another operator. That’s how things happened. I did terrible things

It’s a Different World The Biography of Les Spencer