Richard Coppin was born in 1957 and grew up in the village of Balderton, near Newark in Nottinghamshire. After returning from Canada in 1980 he became a freelance illustrator, a move which developed into a successful graphic design business over the following twenty years. He now lives in Grantham, Lincolnshire and, with his wife Andrea, publishes the award-winning Grantham Now magazine. They have three children and five grandchildren. However, the origins of his career are rooted in a seminal event in his own childhood, as he now explains. 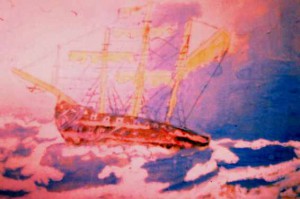 “It all began for me in Portsmouth back in 1964. I was seven years old when my parents took me to see HMS Victory in dry dock there. The sight of this old wooden ship stirred in me a compelling desire to draw it; beginning my life-long love affair with pencil and paper. Returning to my infant school I painted this picture of my most memorable holiday experience. It won first prize that year after being submitted to the Town Hall in a multi-school art competition, an event that I believe planted the seed of a gift; something which even then, I knew was going to play a big part in the years to come.

In 1997 I won a nationwide Graphic Designer of the Year Award, competing with over three hundred and fifty worthy entrants, an event held at the N.E.C. I mention this as a counterpoint to never having received any formal training. My experiences, forged in the real world have instead directed me towards a truly rigorous commercial development of talent that has grown through self-determination; where all assignments present an examination of sorts and where second best never suffices; individual events in my life which have carved out my idiosyncrasies alongside an ever-growing love of creativity.

In tandem with working on visual imagery there evolved a love of making pictures from words. At eleven years old I wrote a Jules Verne style book about the adventures of a giant steam-powered flying machine; illustrated throughout, of course! To write a story that others could be fascinated by became an alchemist’s dream for me, where the base metal was the alphabet and the emotions they could unleash the purest gold. My novel; ‘The Curse of Beckett’s Wood’ released on to the Kindle Bookstore in July 2014 is spun with such emotive word forces; the result of polishing and developing another gift over many years. Please take the time to visit and download your first Richard Coppin novel.

From these two elemental strands, impregnated with imagination and curiosity, a career as an illustrator, designer, writer, poet and publisher has emerged, thanks in no short measure to the constant support of my wife; Andrea along the way. If you’d care to travel further, I’ll show you snippet of a life’s work. I hope you’ll enjoy the trip.”

Between 1995 and 1997 I was elected and took the chain of office as President of the Grantham Chamber of Trade. I then served as Vice Chairman of the Board of Governors at the Central Technology College in Grantham from 1999 to 2003.

During my time with the Grantham Journal I won three awards simultaneously; best ROP (Run of Paper) advert in mono, best ROP advert in colour and for Best series of Campaign adverts in colour. It was very unusual that anyone should win in all three main categories at the same event.

Through the artwork I carried out on the ‘Trail of Tales’ children’s book for Dunster Castle in Somerset, I was appointed an approved illustrator for The National Trust in 2016.

I would mainly like to thank Andrea, my wife, for the unstinting support she has given me over many, many years to produce not only these examples of work visible through this website but the many other pieces of graphic and literary work that doesn’t feature here.

Thanks also to the many clients who have given me the opportunity to produce such a wide range of work. I am grateful not only for the assignments they have provided me with but also for the many friendships that have resulted through our association.

Finally, thank you to Peggy Broadley of Nanatech for her technical skill and unwavering patience in producing this site; something which I am very proud of.