The Curse of Beckett’s Wood 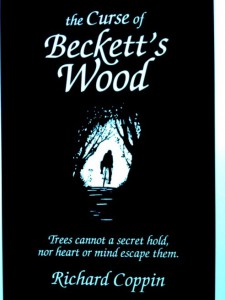 Available on the Amazon Kindle Bookstore
Sinister, disturbing, unsettling, strange and seductive; ‘The Curse of Beckett’s Wood’ is a novel that leads you away from your comfort zone by wrapping its toxic tendrils around your unwitting senses, ensnaring you in its quicksand, luring you into its dark places to cast its shadow over your imagination, ensuring that the tale lingers in your mind long after the final sentence has been read.

Here then is a love story and a hate story, a mystery, a thriller and a work of deranged fiction. The book is in three parts.

The tale opens with a cyclist arriving at the fictitious Wiltshire village of Empton in the mid 1950s. In fact the working title for the work was initially ‘The Cyclist’ until it was deemed by many readers that it failed to convey its dark spirit, forcing me to come up with a title that matched the book’s character.

The cyclist is sucked into the beguiling and twisted character of village life and eventually meets a key member of the brutal ruling family, the one and only Daniel Harper. This is a study into power bullying in the extreme, making us live the moments of the unknown cyclist torments. Many other strange, yet seemingly ordinary things shape the cyclist time there all except for one, the meeting of a girl, an event that happens in the nearby Beckett’s Wood and sets the curse, which that from this point on will run through the book like a poison. This is written in the third person. The style is intimate and descriptive in its imagery.

Part two of The Curse of Beckett’s Wood is written in the first person to resemble an autobiography, though a confession would be nearer the mark. Here is the life of David Harper from the age of six. His childhood is pitiful; a smothering of abuse both physical in boyhood through to sexual in puberty that bends his mind out of shape so that he is unable to travel through life except by a skewed invention of counter-balances. Throughout there are faint echoes of a village from long ago that form themselves into terrifying dreams that leach out into his daily life, which alongside memories of the abuse make the most simple of relationships impossible. The breakdown when it happens destroys him piecemeal from the inside.

The help he receives only makes matters worse at first until he can fight it no more and he is sectioned. The therapy when it works not only astounds him but creates more questions than it answers, so that as Part Three begins we find ourselves with David on the threshold of a detective story, peeling back layer on layer of intrigue and unimaginable mystery. Armed with answers the story leads on to a cataclysmic finale only to trip the reader up at the end with a set of twists that send the imagination into a spin, for all the clues were there but so devilishly hidden.

This is a book not for the prude or the easily offended but rather a tale for those with the nerve to descend with David Harper into those frightening and desolate corners of the mind. In its simplest form this is the story of a mental breakdown as seen from the inside, and its unsettling aspect comes from the fact that it highlights that none of us are immune to having the balance of our minds disturbed or our psyche’s broken in such a way.

A section of Part Three, Chapter One

The scaffolding workers had made room for entry through the main door, and there, still fastened to the ground was something he had seen over and over. He’d seen it in the pictures of the wedding. He’d seen it for himself. It was the boot scraper, now in a state of decay and rust. Even still he knew that it proved nothing. Proof, he needed proof. That’s what he’d come for. This is where the brainwave had led him. Soon he was striding across the long grass in the churchyard, and there beneath a tangle of weeds he found what he was looking for. Sorrow filled his eyes as he read the words, now eroded by time.
Sacred to the memory of Herbert Ashcroft, husband of Jane Ashcroft. Departed this life 17th July 1955.
The stone lay next to an older one that belonged to his wife. David craned his neck to behold his two companions.
“See,” he managed to say through his tears, “I told you I’d been here before,”
Norman took hold of the weeds that obscured the stone and read the words out loud. David didn’t know whether his emotions were the result of his vindication, or at seeing the resting-place of his friend. Perhaps it was both. Either way, it was enough for Helen to attempt to comprehend David’s tortured life. Their eyes met; the hypnotherapist, and the patient. Only now she too found it hard to hold back the tears that were welling up behind her glasses. She removed them, wiped her eyes with the back of her hand, and flung her arms around the lost soul who stood before her. Norman stood up from the grave, and beheld the two in embrace. By some instinct, he joined them. Whether he did this so as not to be left out, or because he too felt for the one who had proved his incredible story, or so that he could take his beloved up in one arm at least, he could not say. Maybe it was all of these things, and many more besides. For in the bundle of the three of them, the three that had so spontaneously and yet so unpredictably come together, there existed the hot magma of silent feelings, as if a red-hot core of emotional energy was about to burst from them. But it didn’t. They just stood there, in the cold air that seems to belong in a churchyard, each one thinking their own thoughts, and wondering where they went from here […]

The Curse of Beckett’s Wood