The Mystery of Old Dyke Mill 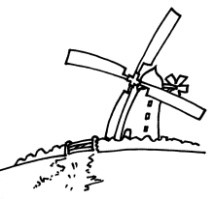 There is a stretch of marshland at the end of Old Dyke Lane.
It’s always bleak and lonely and there’s often wind and rain.
For no one ever goes there, save the keeper of the mill,
And he’s been dead for twenty years, but people see him still.

At times when dusk is fallen and there’s not the slightest breeze
The mill sails start a turning; least that’s what some folk sees
It goes against all nature that the mill should come to life,
And you can guess that rumours round the village pub are rife.

As pints are swigged and darts are thrown the talk is of poor miller
And whether after twenty years they still might find his killer
Especially on those windless nights, when mill sails round are flung,
They whisper of poor miller, and the night they found him, hung.

They say that out on Old Dyke Lane, when moon is shining full,
The ghost of Thomas Carver strides across the marsh so dull
They say the sack he carries on his back contains his soul
And that searching for his murderer can be his only goal

But no one dared to follow in his tracks beyond the lane,
The Blacksmith, he turned down a bet and said, “You’re all insane,”
“Though I’ve the biggest muscles hereabouts, and I’m not boasting,
There ain’t no way in this wide world you’ll get me out there, ‘ghosting’.”

The story might have ended there, but save for Adam Weedon,
A local teenage schoolboy who was very fond of reading.
His favourite kind of stories which he read most all the time,
Encompassed fact or fiction and were always ones on crime.

One book called ‘Diamond Robberies’ went back to 1820.
It kept young Adam mesmerised on crooks and thieves a plenty,
But halfway through there was a tale that read just like a thriller,
About a massive diamond, and a murder, and a miller.

The story wouldn’t say just where the crime had been committed
For though the salient facts were there, locations were omitted
A mention of a windmill near a village had been given, and
Young Adam’s mind began to get imagination driven.

He went back to the library, and scanned the ancient papers,
The broadsheets and the tabloid rags for local crimes and capers
At last he found two columns which referred to stolen jewellery, and
It gave him lots of info on the diamond thief’s tomfoolery

It seemed the naughty burglar was a stranger to the county,
And didn’t know exactly where to hide his stolen bounty.
The journalist had written that he’d climbed up Burnt Stump Hill,
From where he saw what he assumed was just a disused mill.

The rest became a legend, and a week after the raid,
They’d taken poor Tom’s body to the graveyard to be laid.
The thief had somehow vanished and the trail had just gone dead,
And clues were nowhere to be found, or so the story said.

The tale had now just petered out as facts made way for guessing.
So Adam thought right there and then he’d solve the crime, no messing.
Leads were what he needed and the best clues he’d obtain,
By getting out his trusty bike and head to Old Dyke Lane.

At six ‘o’ clock on Saturday through morning mist he travelled,
And in his mind he thought by lunch he’d have the crime unravelled.
He parked his bike and made his way across the marshy bog,
Until he saw a mill-like shape come looming through the fog.

The mill was like a monster, and the door was like its mouth.
It seemed to eat young Adam as he entered from the south.
He gazed above, through musty air, and saw the mighty workings,
The gears and cogs through which he’d have to do his sleuth-like searchings.

But just as he began to take the steps up to the top,
He heard a bang and clatter, which brought Adam to a stop.
He peeped at where the sound had come, and hid a few steps back,
And there he saw a human form, and next to it, a sack.

The ghostly one was hunting like the evil one possessed,
And all around lay bits of the machinery that he’s messed.
To see this filled young Adam with a great deal of suspicion,
No way was this a kind of supernatural apparition.

But what could he be looking for in such a way so manic?
The young lad’s mind began to race and soon filled up with panic.
Should he wait for dark to come, then slink into the night,
Or run like mad and pedal down the lane with all his might?

Before his mind had thought it through, he’d tip-toed out the door,
Re-traced his steps , got on his bike as down the lane he tore.
He soon got home and yelled upstairs for Mum and Dad to waken,
And when they saw his ashen face both parents looked quite shaken.

He told them what he’d seen, and he began to catch his breath.
His parents, not quite woken, said, “You’ll worry us to death.”
“I told you not to go there,” said his Dad. “The place is haunted.”
“That was no ghost!” the lad replied, his thinking quite undaunted.

Now, it so happened that his Dad played darts with Sergeant Dean.
He went downstairs and phoned to tell him what his son had seen.
“Well thanks,” the sergeant answered him. “I’ll get my men together,
We’ll see if we can’t catch Old Carver’s ghost once and forever.

The mill was soon surrounded by the sergeant’s men in blue.
“Now come on out,” he ordered, “If you know what’s good for you.”
Meanwhile two big policemen went to get the man inside,
They chased him higher up ‘til he had nowhere else to hide.

The man now breathing heavily gave up without a fight,
Then handcuffed he was led outside into the morning light.
It took five days of questioning at the station to determine,
That here was thief and killer; a nasty little vermin.

The police had their confession from the man, whose name was Randall,
Which silenced claims of those who thought their police work was a scandal.
His statement told the story from the raid up to his capture,
Which Adam heard via Sergeant Dean; his mind in constant rapture.

Now, Randall’s story stated that he’d raided Grayson’s Jewellers,
And hidden all the diamonds somewhere safe, which was his rule, as.
He could then escape, unburdened of his booty from the police,
Then go back some time later to collect it at his ease.

He’d carefully secreted all the gems within the gears,
He thought that as a disused mill , they’d hide there safe for years.
Yet though the mill looked derelict, Tom Carver called it home,
And save for odd trips to the pub ne never liked to roam.

It seemed as Randall slinked away, Tom staggered homeward, steaming,
And in the morning must have seen the sack of jewels gleaming.
Days later he had started out to hide them in the ground,
And halfway through the job was interrupted by a sound.

Tom must have headed back along the footpath to the mill,
For that’s when Randall saw him as he moved in for the kill.
For Tom had only seconds to secrete the last big spangle,
Before the robber throttled him and lynched him high to dangle.

As quick as light he got a spade and dug into the mound,
Then pulled out nearly all that Tom had buried in the ground.
But there was one thing missing from his bag of sparkling loot,
The diamond called the ‘King of Hearts’; a gem of gems, a beaut.

Now, knowing that the cops would soon descent upon the mill,
Randall left the murder scene going back via Burnt Stump Hill.
That’s where he left his footprints of his tiny little shoes,
The police thought kids had made them and ignored these tell-tale clues.

For twenty years at intervals he found himself returning,
To find the ‘King of Hearts’ was the obsession that was burning.
He moved the gears to find it as he worked at dizzy heights,
Which made the sails revolve around upon those windless nights.

That’s just what he was doing when young Adam came a viewing,
The tale the lad had told his Pa had thus been his undoing.
There was no ghost of Craver, it was Randall with his sack,
And he ended with these words, “You’ll never get your diamond back.”

The case made every headline as it rumbled through the court,
Which Adam read, bedevilled by the reoccurring thought, that,
The Coppers in the gem search, though each like of thought had followed,
Had not used lateral thinking, and imagined, ‘Was it swallowed?’

If Adam’s hunch was certain, then the police would find the stone,
Some six feet under, where they’d find Tom’s rotting skin and bone.
He told his Dad his theory and his Dad thought long and hard,
Then his Dad phoned up the sergeant who got hold of Scotland yard.

They had to get permission to exhume Tom Carver’s bones,
But six weeks on, a JCB clawed out the soil and stones.
Behind a screen a crane came in and lifted out the coffin,
And then there set to business a forensic type of boffin.

The lid came creaking off, revealing Carver’s last remains,
A skeleton of ribs and spine, and rotting flesh and veins.
The boffin chap delved deep into the intestinal parts,
And hit on something big and hard. It was the ‘King of Hearts’.

So Adam was a hero, for his genius he was praised.
And many pints of bitter in his name that night were raised.
His Dad was proud as punch that his young lad had solved the mystery,
And said of his detective skills, “Well, they’ll go down in history.”

The mill became a tourist trap, where folks could hear the story,
Of Carver, Randall and the gem, with details grim and gory.
When Adam tells the tale himself it gives them all a thrill,
To hear first hand just how he solved, the mystery of the mill.

The Mystery of Old Dyke Mill a Poem by Richard Coppin