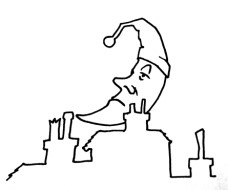 Flung with a sower’s arm in to the ‘deep lagoon blackness of night, scattered on an earth not seen, a glittering of sodium pinpricks trace streets and byways, the prouder ‘A’ roads and the little lanes. Seen from the rise, they flicker below like the dying embers of a tired fire. And either side like a mother’s bosom, dimmed hills fall down, as would her cleavage, where in that dark place, that well’s depth blindness, a river crawls, senseless to the town that has been built around it.
Gloom hidden roofs in countless acres smother ancient farmlands there. And beneath their eaves bedroom windows gaze out, deadening more the stillness of the hour. Upvc and glass seal in those who have given in to sleep, that great leveller, where all the great and poor dream, snore and break wind.
There is movement in the deadness; souls that defy convention and prowl among the still. An empty bottle in hand that he presumes not drained, he commands feet that won’t obey to carry him to rest. His morsel splattered star-like in the gutter lays a pace behind. The taxi driver slides past, glad that the be-bottled fool is not inside his warm liquor and fag scented cocoon. And dozing in a side street waiting, a crocodile, the traffic cop, misses the taxi’s speed for home. That great leveller has claimed another one. The crackling squawk links him to base by an electric shock, his dream implodes, his attention grabbed. He sounds alert through practice, heart pounding, hating the hollowed-out shift of the blackened earth’s slow spin.
Others break the stopped earth’s rules. The High Street, denied its bypass surrender to the eight-wheeled visitors from France and Latvia, bound for other sleeping towns. Their engines break the spell of night then dwindle away to climb the hill’s breast, leaving behind its footprint, its carbon legacy.
The wee small hours roll on like a dream, granting the girl’s plan to go her way. It could have been anyone, but it’s him tonight. The doorway coneals all but the chill. Fumbling, rummaging, erratic her dream comes and goes. The spent condom found in the morning will tell its own tale and she will try to forget, until another night.
Here is a world; one of pristine quietness, pierced and torn with voices. Lusty men, their beer induced bravery, shout down the night. They paint the black air with their profanities and judge themselves clever. The night absorbs it patiently. It’s seen it all before. It knows what’s coming. Up there, just beyond the hill, a promised trace of dull yellow. Time to pack the night away and save it for tomorrow.

The Wee Small a Poem by Richard Coppin